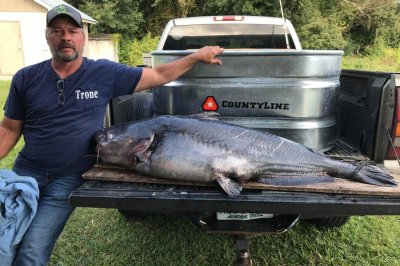 Oct. 23 (UPI) — A Florida fisherman set a new state record in Georgia when he reeled in a blue catfish that tipped the scales at 100 pounds, 6 ounces.

Tim Trone of Havana said he was visiting friends in Georgia when he decided to join a fishing tournament on the Chattahoochee River.

Trone said he knew he had far exceeded his expectations when he attempted to weigh his catch on a 100-pound scale.

“We pulled it up and the bottom scaled out and I knew right then, like I’ve got the Georgia record,” he recalled.

Trone’s fish, which measured 58 inches long and 42 inches in girth, was officially weighed at 110 pounds, 6 ounces, enough to clinch the record.