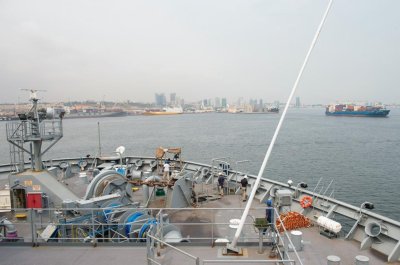 Sept. 7 (UPI) — The USS Hershel “Woody” Williams has arrived in Luanda, Angola on Tuesday where members of its crew will participate in activities aimed at bolstering women’s participation in military services globally.

During the scheduled port visit, Cmdr. Ernique Sesler, the ship’s executive officer, will lead the crew’s participation in the Women, Peace, and Security conference where Angolan government and military leaders will discuss opportunities for women leadership in security services, the U.S. Navy said on Tuesday.

The conference is part of a larger effort by the U.S. Africa Command and U.S. Naval Forces Europe-Africa to promote meaningful female military participation.

As part of the visit, sailors from Hershel “Woody” Williams will build local partnerships in the southern African nation through a community relations activity at a local beach.

“Having tangible experiences that make a real impact on the places we visit allows sailors to build personal connections with local communities, connections that extend further than they know,” Capt. Chad Graham, commanding officer, USS Hershel “Woody” Williams, said in a press release.

Part of the U.S. Sixth Fleet, headquartered in Naples, Italy, the USS Hershel “Woody” Williams is the first warship permanently assigned to the U.S. Africa Command area of responsibility.

The ship’s arrival in Angola follows a joint training exercise last month with Brazil’s navy and marine corps off of Africa’s west coast.

In July, the ship swapped out its crew at the Naval Station Rota in Spain after sailing around Africa from Djibouti.

An expeditionary sea base that provides infrastructure and support for the deployment of forces and supplies, the 784-foot-long Hershel “Woody” Williams was commissioned in 2020 and features a 52,000-square-foot flight deck.