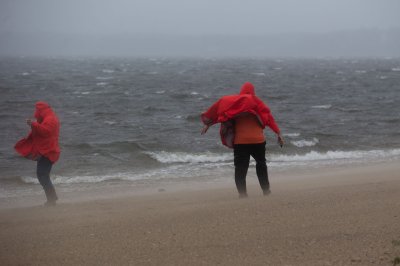 Tropical Storm Henri was racing full steam ahead over the open Atlantic early Sunday morning, headed north toward a rare landfall in New England. AccuWeather meteorologists say that dangerous impacts are already underway for parts of the Northeast.

It’s been just over 30 years since a hurricane delivered a direct hit to New England. The last hurricane to make landfall in New England was Hurricane Bob in 1991. Bob came ashore in Rhode Island as a Category 2 hurricane on the Saffir-Simpson Hurricane Wind Scale on August 19, 1991.

At 6 a.m. Sunday morning, the National Hurricane Center downgraded Henri weakened from a Category 1 hurricane to a strong tropical storm.

In the 8 a.m. update, Henri had maximum sustained winds of 70 mph and was traveling north-northwest at 16 mph, and was about 40 miles south-southeast of Montauk, N.Y., and about 75 miles south of Providence, R.I.

The NHS warns of “dangerous storm surge, strong gust winds and flooding rainfall” in portions of the Northeastern U.S.

Henri is rated a 2 on the AccuWeather RealImpact™ Scale for Hurricanes in the United States due to the anticipated rainfall, damaging winds and storm surge set to impact Long Island and New England.

The storm had picked up considerable forward speed on Saturday after chugging along at just 7 mph on Friday. Sunday morning Henri continued its brisk pace.

But, as of Saturday morning, the hurricane watches in effect for Martha’s Vineyard and Nantucket had been discontinued by the NHC and replaced by tropical storm warnings. Nantucket is also under a storm surge warning.

AccuWeather forecasters caution that impacts from Henri will be significant and calls for preparations ahead of the storm to be taken incredibly seriously. Henri is forecast to bring torrential downpours, strong wind gusts and inundating storm surge to coastal areas of the Northeast.

Early this week, Henri has tracked slightly farther to the east than initially forecast. Given that, AccuWeather forecasters say the prospect of a rare Long Island landfall is decreasing in possibility.

“It’s looking more likely that Long Island will be spared a direct strike from Henri, as the storm continues to charge northward at a swift pace and has yet to make a turn to the west as of early Sunday morning,” AccuWeather Meteorologist Reneé Duff explained.

Henri is now forecast to come ashore near the border between Connecticut and Rhode Island around noon Sunday. AccuWeather forecasters emphasize that this slight eastward shift in Henri’s track will not drastically change the storm’s overall impacts.

“Residents of Long Island should not let their guard down with the storm’s shift in track, as there will still be heavy rainfall, storm surge flooding and damaging wind gusts,” Duff cautioned.

The total damage and economic loss from Henri is estimated to be between $8 billion and $12 billion, according to AccuWeather Founder and CEO Dr. Joel N. Myers, who pointed to storm surge as the most threatening hazard Henri poses to the Northeast. Myers added that wind damage will also be significant.

“Even though it is a strong tropical storm on the Saffir Simpson Hurricane Wind Scale and a 2 on AccuWeather’s RealImpact™ Scale for Hurricanes, the area it is impacting is highly populated and there are multi-million-dollar homes on Long Island, particularly in the Hamptons and the south coasts of Rhode Island and Connecticut, and many properties are close to the shore,” Myers said. “And, not all of the boats in those areas were lifted out of the water to safety.”

According to Myers, who has been studying the economic impact of severe weather for more than 50 years, Henri is no Superstorm Sandy, which blasted the East Coast in late October 2012.

“There will be damage in the affected areas and people should take all the recommended precautions to remain safe, but Henri is not like Sandy in any way, shape or form,” Myers said.

The heaviest rain is likely to fall to the north and west of Henri’s exact track. Heavy rain directly from Henri first arrived across Long Island and southern New England early Sunday morning. Heavy rain will continue to spread over portions of New York and northern New England through Monday.

The heaviest rainfall of 4-8 inches with an AccuWeather Local StormMax™ of 18 inches will aim for Long Island, Connecticut, parts of Rhode Island and western Massachusetts.

A secondary area of concern for heavy rain made itself known initially on Saturday evening for parts of New York and New Jersey. AccuWeather forecasters say the interaction between Henri and a surface weather feature already in place led to enhanced rainfall for the area. Parts of the greater New York City metro area picked up widespread rainfall totals of 2-4 inches in just a few hours on Saturday evening, leading to flash flooding issues.

For many New Englanders, Henri will be the first real brush with a hurricane in decades — and maybe ever for some.

“This is the most serious hurricane risk in New England in 30 years, since Hurricane Bob in 1991,” AccuWeather Chief Meteorologist and Senior Vice President of Weather Content and Forecast Operations Jon Porter said of the looming threat.

The already-saturated ground will also be a concern when it comes to Henri’s anticipated strong winds.

“In soggy, saturated ground, tree roots can lose their grip in the soil more easily due to the root system being compromised,” Duff explained. “As a result, it takes a much lower wind gust to knock over a tree sitting in wet soil as opposed to dry soil.”

In addition, trees still have all of their leaves across much of southern New England, which can make them more easily weighed down by heavy rain and more susceptible to broken branches.

Strong winds are also going to be a threat as Henri strikes coastal areas.

Widespread wind gusts of 40-60 mph are forecast to impact areas from Long Island to Maine into Monday. The strongest winds with Henri will likely occur along and just east of the storm’s path. Wind gusts upwards of 80 mph with an AccuWeather Local StormMax™ of 90 mph are most likely from eastern Long Island into portions of eastern Connecticut and Rhode Island Sunday morning, largely in the hours surrounding landfall.

Winds of this magnitude will likely be enough to cause significant damage to trees, which can subsequently cause damage to power lines. AccuWeather forecasters are seriously concerned about the risk for widespread and perhaps prolonged power outages in the wake of Henri and the damage the storm is expected to cause.

On Friday, Connecticut power company Eversource estimates between 50 percent and 69 percent of its 1.25 million customers may lose power as a result of Henri. And if that news isn’t grim enough, the company estimates that power restoration could take anywhere from 8 to 21 days.

Another significant risk with Henri will be its potential to produce a dangerous storm surge.

“Henri’s strong winds will funnel water into bays and inlets and raise the water level along the coast,” Travis said.

Henri’s arrival in the Northeast will also coincide with a full moon on Sunday. This combination could bring higher tides and more widespread coastal flooding than what could occur during a different lunar phase.

Storm surge of 1-3 feet is forecast to expand from the southern New Jersey coast to Maine, and a 3- to 6-foot storm surge is anticipated from eastern Long Island to Cape Cod.

According to AccuWeather Meteorologist Nicole LoBiondo, conditions in cities in eastern Massachusetts, such as Boston and Worcester, will begin to dry up by Monday night, however spotty thunderstorms or showers cannot be entirely ruled out, which she said could hinder the clean-up efforts following Henri.

“High pressure will try to press into New England Tuesday night as Henri dissipates along the Maine coast, drying out much of the region and allowing for clean up efforts to continue,” LoBiondo said.

AccuWeather meteorologists began warning that the Atlantic coast, including southern New England, would be at risk for tropical weather impacts this season in the annual fall forecast released in early August.

Interestingly, the weather system that gave rise to Henri started out nearly two weeks ago as a cluster of thunderstorms over the middle of the continental U.S. That weather system raced across the country and headed out to sea over the Atlantic, where on Monday it formed into Tropical Storm Henri near Bermuda.

If Henri hits where AccuWeather forecasters are predicting, it will be the first hurricane in decades to make landfall in New England. It will also be only the eighth time a hurricane has struck the region since 1900.

The last hurricane to make landfall in New England was Bob in 1991. Bob made landfalls in Rhode Island and Maine, and caused $1.5 billion in damages, roughly $3 billion in today’s dollars, in Massachusetts. Winds greater than 100 mph and severe coastal flooding blasted Massachusetts during Bob’s rampage.

Myers’ economic impact estimate is based on an analysis incorporating independent methods to evaluate all direct and indirect impacts of the storm and is based on a variety of sources, statistics, and unique techniques AccuWeather uses to estimate the damage, and includes damage to homes, property and businesses as well as their contents and cars, job and wage losses, infrastructure damage, auxiliary business losses, travel disruption, medical expenses and closures.

The estimate also accounts for the costs of power outages to businesses and individuals, for economic losses because of highway closures and evacuations, emergency management and the extraordinary government expenses for and cleanup operations.