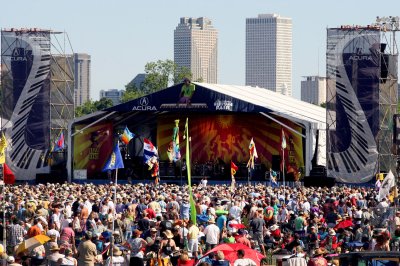 Aug. 9 (UPI) — The New Orleans Jazz and Heritage Festival known locally as Jazz Fest has been canceled for a second consecutive year due to the coronavirus pandemic, organizers said.

The 10-day spring festival, which was canceled last year and postponed until October, will not be held this year “[a]s a result of the current exponential growth of new COVID cases in New Orleans and the region and the ongoing public health emergency,” the organizers announced Sunday on its website.

“We now look forward to next spring, when we will present the Festival during its traditional time frame” of April 29-May 8, it said. “In the meantime, we urge everyone to follow the guidelines and protocols put forth by public health officials, so that we can all soon experience together the joy that is Jazz Fest.”

Among the bands scheduled to perform was the Rolling Stones, who were scheduled to take to the stage Oct. 13.

Mayor LaToya Cantrell called the cancellation of the event, which attracts thousands to the city, “appropriate but really disappointing.”

“We believe that the Jazz Fest organizers made the right call, heartbreaking though it is,” she said in a statement. “The Delta variant has created an extremely dangerous environment — threatening the lives of our children and vulnerable populations and threatening our hopes for an economic recovery.”

The decision to cancel the event was announced as the state of Louisiana combats surging COVID-19 cases. On Friday, it reported more than 6,110 cases, according to state data. In June, infections stabilized at between 300 and 400 a day before beginning to skyrocket in July.

Johns Hopkins University, which has been tracking the pandemic, counted 32,334 cases in the past which, which is a record high for the state.

Early this month, Gov. John Bel Edwards reinstated Louisiana’s statewide mask mandate indoors for all those above the age of five as the infections were threatening hospital capacities.

“It has never been more clear that we are in an unchecked COVID surge that, in addition to threatening the health and well-being of many Louisianans, also threatens the capacity of our hospitals and medical facilities to deliver care to their patients,” Edwards said in a statement.