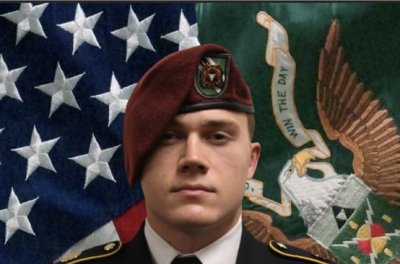 Aug. 28 (UPI) — They had plans to attend school and start careers. One was excited to become a father. They left people back home who remembered them for their dedication, or their big heart or their laugh.

Now those people back home and all over the country are in mourning.

On Thursday, 13 U.S. service members and dozens of Afghan civilians were killed in a suicide attack by Islamic State-Khorasan Province near Hamid Karzai International Airport.

The U.S. responded Friday night with a drone strike targeting the planners of the attack.

President Joe Biden said in a statement that the strike wouldn’t be the last and U.S. forces “will continue to hunt down any person involved in that heinous attack and make them pay.”

The airport has been inundated with Afghans trying to flee the country after the Taliban took control of the country’s capital earlier this month. Biden said the U.S. brought another 68,000 people out of the country on Friday, including hundreds of Americans. He thanked service members for allowing 117,000 people to reach safety.

“The 13 service members that we lost were heroes who made the ultimate sacrifice in service of our highest American ideals and while saving the lives of others,” Biden said.

Details of the 13 service members who died in the attack have trickled out since then. Here’s what we know about them.

Espinoza, 20, was born in Laredo, Texas and attended Lyndon B. Johnson High School, but lived his entire life in nearby Rio Bravo, reports KGNS.

Elizabeth Holguin, his mother, told the Washington Post that her heart has “a David-sized hole nobody can fill.”

“It was his calling and he died a hero,” she told the paper.

Holguin said the two last spoke Wednesday. His last words to his mother were, “I love you.”

U.S. Rep. Henry Cuellar, a Democrat from Laredo, wrote on Facebook that Espinoza “embodied the values of America: grit, dedication, service, and valor.”

“When he joined the military after high school, he did so with the intention of protecting our nation and demonstrating his selfless acts of service,” said Cuellar.

Pictures of Gee, 23, of Sacramento, Calif., have been circulating on social media in recent days showing her escorting evacuees onto planes leaving the country. One photo posted to her Instagram account shows her holding an Afghan baby.

Originally from Roseville, Calif., Gee was mourned by friends and other service members on social media, reports Fox 40.

“She was doing God’s work ….. a warrior,” Capt. Karen Holliday said in a post on her personal Facebook page, cited by Stars and Stripes. “Searching Afghan women and children trying to get out of country.”

Hoover, 31, of Salt Lake City, Utah, had a big heart and a dedication to serving others, his friends and relatives told local media.

Hoover, who went by “Taylor,” played football at Hillcrest High School in Midvale, Utah, and joined the Marines after graduating in 2008. He served three tours of duty in Afghanistan.

His father, Darin, told KSL 5 TV that his son wanted to serve those who were less fortunate and made up his mind to join the military at age 11 following the Sept. 11 attacks.

“He loved his country,” he said. “It meant more to him than anything else, besides his family.”

Nate Thompson, who grew up with Hoover, told the local Fox affiliate that was the “nicest kid in the world” whose shy demeanor would fade as soon as he was on the football field.

“He was really undersized for his position as a lineman,” said Thompson. “But with his big heart, it really didn’t matter.”

Knauss, 23, or Corryton, Tenn., was the only member of the Army who died in the attack.

Knauss was married and was on his second deployment to Afghanistan, the Knoxville News Sentinel reported. He had already served a nine-month deployment in Afghanistan after joining the Army right after graduating from Gibbs High School. He was awarded the Purple Heart and Bronze Star, among other decorations.

Part of the Army’s psychological operations program, “or psyops,” he was assigned to the 9th PSYOP Battalion, 8th PSYOP Group, Ft. Bragg, N.C., according to a Pentagon press release.

His stepmother, Linnae Knauss, told News Channel 11 that he was looking forward to coming back to the states and moving to Washington D.C.

“He was a super-smart, hilarious young man,” she said.

He had wanted to be a Marine since he was 10, the family told the television station in a statement. Lopez was on his third deployment where he had carried an Afghan boy 5 miles to safety.

“Please light a candle for Hunter so he can find his way home,” the family told NBC Palm Springs.

Lopez planned to follow his parents into service as a sheriff’s deputy after returning, the family said.

“Like his parents who serve our community, being a Marine to Hunter wasn’t a job; it was a calling,” the Riverside Sheriff’s Association said in a press release.

“Our entire department is mourning this tragic loss,” Sheriff Chad Bianco said on Facebook. “The Lopez family exemplifies the meaning of Service Above Self.”

Lopez was also mourned by the local school district and a local soccer club.

McCollum, 20, of Jackson, Wyo., knew he wanted to be a Marine so early in life that his sister, Roice McCollum, recalled to the Jackson Hole News and Guide how he carried around a rifle in his diapers and cowboy boots. He enlisted the day he turned 18.

Roice recalled how in her final conversation with her brother about a month before he died, he talked about wanting to see the family’s cabin when he returned home. He also told her about his nervous excitement to become a father. Shortly before his deployment in April, McCollum was married.

“He was going to be the best dad,” Cheyenne McCollum, another sister, told EastIdahoNews.com. “We don’t know (the gender of the baby). They decided to keep it a surprise. We hope it’s a boy. I had a baby in 2019, and he just loved her so much.”

She said her brother, the youngest of four, had plans to be a teacher and wrestling coach after his service.

Merola, 20, of Rancho Cucamonga, Calif., had only been in Afghanistan for a week and a half guarding evacuees, reports CBS Los Angeles. His mother, Cheryl, described him as kind, loving and “one of the best kids ever” who planned to study engineering.

She said she saved her son’s last message that concluded with “I love you” and a promise to talk soon.

Nikoui, 20, of Norco, Calif., had “no hesitation for him to be called to duty,” his father Steve Nikoui, told the Daily Beast.

“He really loved that [Marine Corps] family,” he said of his son. “He was devoted – he was going to make a career out of this, and he wanted to go.”

Norco High School Principal Robert Ibbetson told CBS Los Angeles that Nikoui was “just a good kid” and had a “really had a strong energy about him and knew what he wanted to do.”

“It was neat to see that kind of direction and drive and goal-setting,” he said.

Page, 23, of Omaha, Neb., was described as a “genuinely happy guy that you could always count on” in a statement from his family issued to local media.

“Daegan always looked forward to coming home and hanging out with his family and many buddies in Nebraska,” his family said.

A 2016 graduate of Millard South High School, Page grew up in Red Oak, Iowa in the Omaha metro area, reports WOWT. He was a longtime Boy Scout who played hockey and was a diehard Chicago Blackhawks fan, according to the family’s statement.

Page was his younger sibling’s “favorite jungle gym” who loved hunting and spending time outdoors with his father. After coming home he planned to go to trade school and possibly become a lineman.

“Daegan will always be remembered for his tough outer shell and giant heart,” the family said.

Rosario, 25, was a resident of Lawrence, Mass., where she graduated from Lawrence High School and went on to attend Bridgewater State University.

Jonathan Guzman, a classmate of Rosario, called her a “wonderful person with a kind heart” and promised that her city would honor her, reports Boston 25 News.

Lawrence Mayor Kendrys Vasquez said in a statement that the city was mourning Rosario’s death, reported by The Eagle-Tribune. Vasquez added that “the family’s most immediate wish is to be given privacy and that their loved one be recognized as the hero that she was.”

Sanchez, 22, of Logansport, Ind., was remembered as a popular and active student at Logansport High School, reports The Indianapolis Star.

He was described as a dedicated artist, who participated in homecoming court his senior year, played varsity soccer, in addition to taking honors and dual credit college classes.

Matt Jones, principal at Logansport High School, called news of Sanchez’s death a “tough day” on Twitter and said he was thinking of him and his family.

“Humberto was a bright, athletic young man who was popular, well-liked by his soccer teammates, classmates, coaches and teachers,” Jones told Fox 59. “He was honored to be putting on the Marine uniform and serving his country.”

Joining the Marines was something Schmitz, 20, of St. Charles, Mo., had always wanted to do and trained hard to “be the best soldier he could be,” his father told radio station KMOX in an interview.

Schmitz described his son as “one of the coolest, unique individuals I ever met.”

“His life meant so much more,” Mark Schmitz said in the interview. “I’m so incredibly devastated that I won’t be able to see the man that he was very quickly growing into becoming.”

Lexie Correa, Schmitz’s former high school girlfriend at Fort Zumwalt South High School, told Fox 2 Now that the two would talk late at night about how much he loved serving in the Marines.

She said she’d miss his laugh the most.

“You could be having the worst day ever and just a phone call from him would make your day so much better,” she said.

Soviak, 22, of Berlin Heights, Ohio, was proud to be part of a state champion wrestling team and state playoff final four football team two years in a row, according to a statement from his family provided by the U.S. Navy.

But he was most proud of his service in the Navy and planned to make it a career.

His family said they’ve had an outpouring of support from teachers, coaches, employers, family and friends. Soviak leaves behind 12 brothers and sisters all of whom are “hurting terribly,” the family said.

Soviak was a 2017 graduate of Edison High School, where he was on the honor roll, and also earned a two-year certificate in electrical technology from EHOVE Career Center, according to the Sandusky Register.

Soviak told his mother, Rachel, in their last conversations that he was “going to Afghanistan to help people get out,” the paper reported.

Rachel told him to be safe, according to the statement. His response: “Don’t worry mom, my guys got me. They won’t let anything happen to me.”