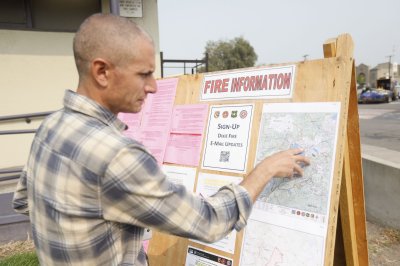 Since it began burning on July 13 the Dixie Fire has grown to 463,477 acres and is just 21% contained, the U.S. Forest Service said Sunday.

“The Dixie Fire is now the second-largest wildland fire in California’s history,” the U.S. Forest Service said. “For the last couple of days, more moderate fire activity has allowed firefighters the opportunity to engage safely along the fireline. However, today starts a drying trend in the weather forecast, returning to warmer temperatures and gusty, southwest winds throughout the week.”

Edwin Zuniga, a spokesman for the California Department of Forestry and Fire Protection, or Cal Fire, told The Washington Post Sunday that officials were working to keep the blaze from reaching homes in the community of Crescent Mills.

Crescent Mills is just miles south of the historic mining town of Greeneville where it leveled multiple historic buildings and dozens of homes.

In total, the Dixie Fire has destroyed 404 structures and damaged 27 others, according to Cal Fire.

The blaze has prompted evacuation orders and warnings in Plumas, Butte, Lassen, and Tehama counties. No fatalities have been reported. More than 5,000 personnel have been fighting the fire, with 393 engines, 87 hand crews, 125 water tenders, 30 helicopters, 107 dozers, and numerous firefighting air tankers throughout the state.

Secure monetary benefits: Improve your salary tax-free: This is how it works | news